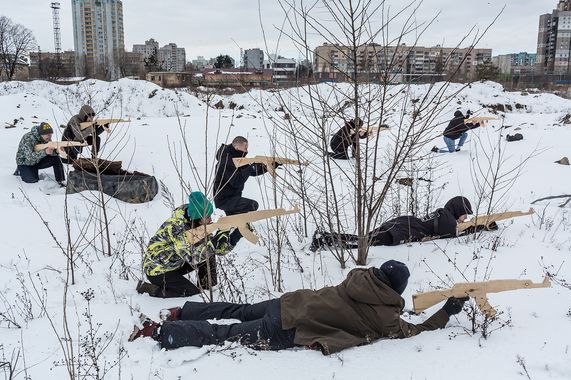 THE NEW ABNORMAL
A COOPERATION WITH THE ODESA PHOTO DAYS

The exhibition THE NEW ABNORMAL at PHOXXI, the temporary House of Photography of Deichtorhallen Hamburg, is a cooperation with Odesa Photo Days Festival under the direction of Kateryna Radchenko. From September 3 to November 6, 2022 works by twelve Ukrainian photographers will convey an impression of everyday life in the face of the war.

The escalation of war and the full-scale invasion of the Russian troops into the territory of Ukraine on February 24, 2022, had a significant impact on the course of history and life in Ukraine. These events have affected every citizen of the country and all the spheres of social and political life. In an instant, life has divided into “before” and “during.” The Ukrainian people went through all the stages of transformation—shock, denial, fear, acceptance, and adaptation.

The goal of the exhibition is to show a new form of life during the war, the processes of adaptation in the social and public space, the transformation of usual rules of conduct and daily routines, and the combination of emotional states of fear, anger, and joy.

The international festival of contemporary photography Odesa Photo Days was founded in 2015 as a reaction to the war Russia started in the eastern part of Ukraine accompanied by the outbreak of propaganda and media manipulation. Held annually for 7 years, Odesa Photo Days Festival in 2022 was canceled due to the full-scale Russian attack in February. Now the festival team is working to spread the word about the situation in Ukraine and to support Ukrainian documentary photographers and photography-based artists affected by the war. Among the House of Photography of the Deichtorhallen Hamburg there are cooperations with the Palais de Tokyo, Paris or the Copenhagen Photo Festival and many more.

The exhibition was curated by Kateryna Radchenko und Ingo Taubhorn.